We develop artificial intelligence that enables robots to operate in uncontrolled environments, such as warehouses and fulfillment centres.

Today’s industrial robots are mainly used in manufacturing industries, such as electronics or automotive. In these highly controlled environments, robots tirelessly perform the same pre-programmed task, such as assembly, welding, or painting. Outside of these environments, which are typically built specifically for the robots used in them, the level of automation is not as high – despite significant advances in machine learning, industrial automation and robot hardware. The reason for this is that robots today still find it difficult to adapt to the variety and dynamics in less controlled environments, while additionally having difficulty accomplishing tasks that are seemingly simple to humans. Our mission is to unlock the potential of robotic automation by creating the intelligence and capabilities needed for the real, dynamic world in which we live.

One area where we have identified a particular need for more automation is the logistics industry. Due to the wide variety of objects, most tiring and repetitive manipulation tasks today are still performed by human workers. Our AI system is unique in its ability to control multiple robotic arms simultaneously and adapt to unforeseen situations. It enables robots to help out in warehouses and handle the ever-growing volume of parcels. 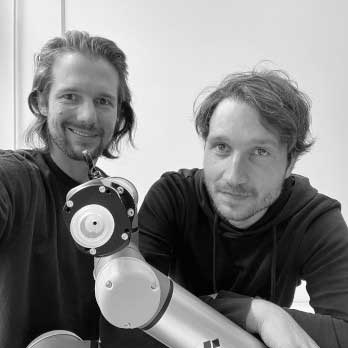 Simon and Moritz are the founders of Robin. They are excited to bring the computational algorithms for robots that they developed together at CRL, ETH to industry.